You are here: HomeBlogFire Alarms – Will Fire Safety Changes Affect You?

There may be fire safety changes in the wake of the Grenfell Tower fire in June of this year. Immediately following the fire, in which at least 80 people were killed, the Government asked for widespread fire assessments of tower blocks countrywide.

The trade magazine Inside Housing has since reported that hundreds of tower blocks in England have safety flaws. While cladding remains a significant issue, assessments have exposed other inadequacies.

These include poor or no emergency lighting on stairwells, and a lack of fire safety information offered to residents.

BSI has revised the British Standard for fire detection and fire alarm systems in commercial buildings, and has received a proposal to do the same for domestic premises. this came before the Grenfell Tower fire, so in the aftermath, it may become far more likely to happen.

Meanwhile, the Department for Communities and Local Government (DCLG) has issued interim fire safety advice for owners of high-rise buildings with failed cladding.

Grenfell Tower has brought fire safety regulations, and people’s responsibilities regarding them, sharply into focus.

As providers of Industrial and domestic electrical services, IDES UK fits and tests fire alarms. We know how vitally important it is to have a properly working alarm in place. Whether you’re concerned about possible fire safety changes, or want to be sure you’re currently up to speed with regulations, we can help.

Are Renters Unprepared for Fire?

To mark Fire Door Safety Week, the British Woodworking Federation commissioned a study of more than 1,000 tenants. It shows that 55% of t 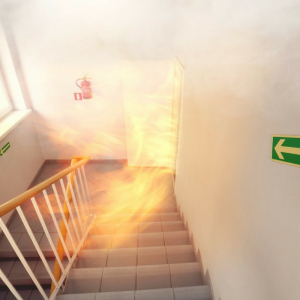 hem do not feel fully prepared, should there be a fire in their building.

40% said their building did not display a clear fire escape route. Other issues the survey highlighted were fire doors left propped open, or damaged, and waiting weeks for landlords’ responses to fire safety infringements.

Following the Grenfell Tower fire, a quarter of the adults surveyed said they felt more anxious about living in rented accommodation in a block.

The survey did also reveal that 23% of private landlords and 10% of social landlords had contacted their tenants after the fire to discuss fire safety.

What matters most is action: ensuring that buildings are properly alarmed, that these are tested, and that they have regular fire risk assessments.

After 9/11 there has been a greater emphasis on evacuation methods, but some people believe that a more fundamental change must come from how buildings are designed and built in the first place.

These measures should include things like pressurised fire lobbies, compartmentalised rooms and sprinkler systems.

The emphasis should be performance-based, rather than on box-ticking. This means looking not simply at individual materials, such as cladding, but how different materials work together in a building’s design.

For example, insulation in some buildings may be a source of fire spreading, where it exists between tower block walls and the external cladding. Because, typically, insulation lies behind aluminium composite cladding on many English tower blocks, it has not been tested. However, it may be even more combustible than the cladding itself.

In fact, Scotland Yard has reported that both the cladding and insulation on Grenfell Tower failed safety tests.

It is possible that the gap between cladding and insulation can draw hot air up the building to then ignite the cladding, in a chimney-like effect.

Where high-rise buildings with cladding have failed safety inspections, the DCLG has issued interim fire safety measures, aimed at landlords. These come from an independent panel of experts.

Firstly, the owner must inform the local fire and rescue service about the block’s cladding, if they have not already done so. 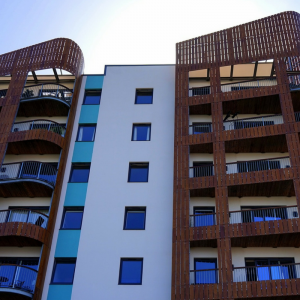 This also applies if material changes have taken place since a previous assessment.

They must advise residents to ensure all fire alarms are working, and report if they see any combustible materials in escape routes.

It’s important that current emergency fire procedures now call for a simultaneous evacuation of the building, pending the cladding’s replacement.

Landlords must check that all residents are able to evacuate the building, and check whether they would need assistance to do so.

They must also check for fire-resistant doors at entrances and onto escape corridors; and that there are no obvious routes along which fire could spread.

Standards and Testing for Fire Alarms 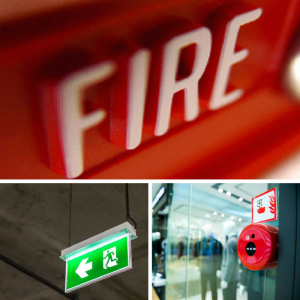 a revised BSI standard for fire alarms in commercial buildings in place, BS 5839-1:2017, it means landlords must check they’re following this code of practice for the design, installation, commissioning and maintenance of their fire alarm systems.

Fire alarms in non-domestic buildings must conform to regulations, including their decibel volume, how many there are, and where they are located.

Key changes in BSI standards cover definition of L2 detectors – designed for automatic detection on all a building’s escape routes – and guidance and clarification around multi-sensor detectors and voice alarm detectors.

The standards also concern the testing of the building’s power supply, and how long battery or contingency power must last.

We’re specialists in industrial and domestic electrical services, and we can help you ensure the fire safety of your building and its occupants or residents.

Whatever your electrical needs or issues, email enquiry@idesuk.com or call 08432 894645.