The Power of Light

You are here: HomeBlogThe Power of Light

As commercial lighting experts, we are always interested in the way good lighting makes people feel, and how it changes the lives of our customers for the better.

Good lighting can change the mood of a room and effect the way you feel when you’re in it.

But it also has a spiritual meaning to lots of religions.

The Significance of Light During Chinese New Year

The red oval, or round Chinese lanterns are synonymous with Chinese New Year and are used to signify the end of the celebrations.

The roundness of the lanterns represents the fulfilment of the year, a period of harmony. And the light is important, as it leads people home.

Originally used by monks during their Buddhist worships, the tradition of Chinese lanterns being used domestically dates back thousands of years to the Eastern Han Dynasty (206BC-24AD). The Emperor Liu Zhuang was a Buddhist and ordered all his subjects to light round lanterns in their homes to honour his deity.

Before gas and electric lights, the lanterns were used to light homes. Thankfully we now have LED lightbulbs!

They have come to be a bit of a status symbol, with very rich families having lots of ornate lanterns.

The Use of Light in Diwali

Just like Chinese Buddhists worshiped the Buddha with lanterns, almost every religion in the world has a ceremonial use of light.

Hindus and Sikhs celebrate Diwali, a festival of light. The word Diwali even means ‘rows of lighted lamps’. Every house, shop and place of worship has little clay lamps lit. A truly beautiful sight!

Sikhs use Diwali to celebrate the release from the Gwalior Fort of the sixth guru Hargobind Singh in 1619, although they did celebrate Diwali prior to this. In fact, the foundation stone of the Golden Temple at Amritsar, the most holy place in the Sikh world, was laid on Diwali in 1577.

Hindus use Diwali to celebrate the return of gods Rama and Sita to Ayodhya after their 14-year exile. They also celebrate the day Mother Goddess Durga destroyed a demon called Mahisha

Christians call Jesus the Light of The World, and often represent him through the use of a candle.

At Christmas, light becomes particularly important as advent candles and Christingles are lit.

The twinkly little Christmas lights that adorn Christmas trees are traditionally supposed to represent the light of the world, too. In past times, Christmas trees were lit with candles. These days, we would recommend the safer LED option! 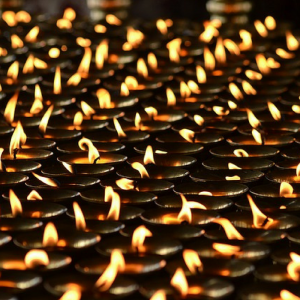 Jews celebrate their significant religious festival, Hanukkah, with light too.

During Hanukkah, Jews light nine candles on a Menorah. The central candle is the one which is used to light all the other candles, one on each day of Hanukkah.

This represents a miracle that occurred several centuries ago, when a temple in Jerusalem was being rededicated to the Jews.

During a war between the Syrian Greeks and the Israelites, the temple was taken over by the Syrian Greeks. When the war was over, the Jews went to light the menorah and found only enough oil to burn for one day, not the 8 days needed to purify more oil. However, it is believed that the small amount of oil burned for 8 days until the purification of more oil for lighting could be done.

Commercial Lighting Solutions for all

Whilst we wouldn’t dare to assume that LED bulbs and commercial lighting could replace the sanctity of candles, lanterns, and oil during religious and cultural festivals, we do offer a range of solutions that are as appropriate for all scenarios as light itself.

Good lighting can make the mood of a room, whether it is sharp and bright, offering perfect clarity, or warm and cosy, offering a comfortable dining environment.

Bad or inappropriate lighting can make people agitated, drowsy, or unable to see their work.

Having an appropriate commercial lighting solution for your work environment can make your customers happy and your staff productive. Inappropriate lighting can have the opposite effect.

We offer a range of lighting products to suit all commercial environments, from body shops and warehouses, to schools and offices.

Have a look at our commercial lighting solutions to find the best fit for your commercial property, or contact us by filling out the form here.